I had the genuine pleasure of meeting Frank Turek at his three day Cross Examined Instructor Academy (CIA) class at Southern Evangelical Seminary in 2013. In the months that led up to CIA, I carefully read I Don’t Have Enough Faith to be an Atheist by Frank Turek and Norman Giesler, which I absolutely loved. Frank (along with Norm obviously) has a way of distilling complicated topics to a lay level for easier comprehension and readability. His delivery is witty and entertaining and allows for his audience to grasp the message in a practical way that promotes a competent understanding of the material. Needless to say, I consider Frank to be a mentor from afar in my apologetic studies. He has guided me via his books and his Cross Examined organization. 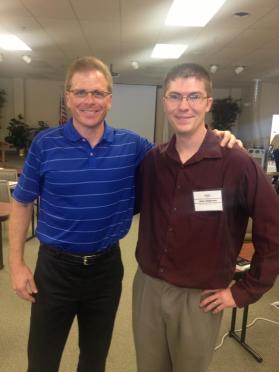 While his other books, Legislating Morality, Correct, Not Politically Correct, and I Don’t Have Enough Faith to be an Atheist, are tremendously valuable for every Christian apologist, I found Stealing from God: Why Atheists Need God to Make Their Case to be the most potent and direct refutation of the atheistic worldview he’s written thus far. If anyone has listened to Turek or read any of his books, you’ll find that he has a creative way of looking at things. He gives a great illustration in the book (page xxix of introduction) about how we do not necessarily need to be an expert in every field of study in order to acknowledge when there is a problem with a particular worldview. He creatively makes an effective comparison between a Christian apologist and a house inspector,

“When we built an addition to our house, I was amazed how many specialists were needed. After the foundation guy, a series of specialty contractors came in. I can’t remember the exact order, but we had the framing guy, the roof guy, the brick guy, the siding guy, the window guy, the electrical guy, the plumbing guy, the insulation guy, the heating/AC guy, the drywall guy, the trim guy, the floor guy, the tile guy, the light guy, the fireplace guy, the paint guy, and an inspector.

Frank is a tremendous inspector and this book outlines his inspection of the atheistic worldview. There are categories of reality that Frank inspected which led him to the conclusion that atheism falls embarrassingly short of accurately accounting for reality. He used the acronym, C.R.I.M.E.S., to present his inspection of atheism. I’ve provided the breakdown of the acronym below along with Frank’s chapter description for each letter,

I – Information & Intentionality – “God’s signature is not just in the cell, it’s in all of creation. God is as necessary to the universe as a band is to music. Once the band stops playing, the music is over”

E – Evil – “Good reason provides all the information we need to see that the very existence of evil is a contradiction for atheism. If evil is real, then atheism is false”

S – Science – “To say that a scientist can disprove the existence of God is like saying a mechanic can disprove the existence of Henry Ford. While there is certainly evidence from science to support theism, the most important point for this chapter is not that science supports theism but that theism supports science. In other words, theism makes doing science possible. We wouldn’t be able to do science reliably if atheism were true”

Frank dives deep into each of these topics that atheists futilely use against God’s existence. Ultimately, if objections to theism necessarily require that theism be true for those objections to make sense, atheism might want to forego its critique on theism. Frank supports the claim that atheists are ‘stealing from God’ when they make assumptions about the world that can only make sense in a world where God exists.

I would highly recommend everyone (believer and unbeliever alike) read this book. Frank is able to keep complicated topics simple and provides helpful examples throughout the book to illustrate his points. He doesn’t allow his intellect to obstruct his ability to prioritize the importance of clearly delivering the message of the book. Being widely read in the area of Christian apologetics myself, I’ve never read a book solely dedicated to this topic. While I’ve read many books that refer to the harsh realities of atheism, I’ve never heard of (before now) an entire book dedicated to this topic. It’s a brilliant idea! Being familiar with Frank’s work for years, I’m not surprised that he wrote a book on the topic because he’s always referring to C.R.I.M.E.S. in the way he addresses these topics when he speaks and writes. For me, this is the most practical Christian apologetics book since J Warner Wallace’s Cold Case Christianity.

A word to unbelievers, this is a book you must read. It will rightfully challenge your worldview and hopefully push you to reconsider your atheistic presuppositions. This is a challenge that must be faced with honesty and a genuine desire to embrace the truth. Frank outlines the logical consequences one must accept in order to be a loyal subscriber to atheism. These philosophical conclusions should prompt to you reexamine your belief that a God does not exist. I would encourage you to read the book with an attitude that allows you to freely follow the evidence wherever it leads rather than reading the book with a presupposition that the existence of God isn’t possible. Judge the book on its merits and you’ll gather a ton of valuable insights from it, and possibly a new worldview.

A word to Christians, this book is a tremendous resource for you. It reveals the deficiencies of the atheistic worldview and presents a solid case for the Christian worldview (for the complete Christian apologetic, read I Don’t Have Enough Faith to be an Atheist). I strongly encourage you to become fluent in C.R.I.M.E.S. because it will help you become a better Christian apologist who is capable of having an informed discussion with unbelievers.

This is a book that will generate discussion among believers and unbelievers alike. Frank is definitely capable of supporting his claims presented in this book in a public forum and I definitely look forward to potential debates in the future. It is people like Frank that do the intellectual hard-work for the church, and help One Dollar Apologists like myself deepen their understanding. Christian apologetics is vitally important for the expansion of the church in today’s secular society. These types of books are tools that help defuse the potency of atheistic claims against Christian theism. Equipped with the knowledge of this book, we’re better prepared to explain why atheism is false and easily point out the false assumptions atheism makes to articulate its case. This book is a wonderful apologetics book that is uniquely capable of delivering a message about the inadequacy of atheism.

11 responses to “Book Review – “Stealing from God: Why Atheists Need God to Make Their Case” by Frank Turek”

The Worldview of Jesus

The Worldview of Jesus